I have a short story about my voiceovers. Approximately two years ago I was preparing some music for a performance for a step team I was a member of. In my mind, I wanted to add a different flair to the edit so I decided to add voiceover vocals. Now I had never done anything like this but it was my creation so why not. All I had was the voice recorder on my iphone. When I took the edit to practice, someone asked. “Is that you you?” I said “Yeah that’s me” and stated laughing. The person proceeded to ask, “Do you do voiceovers?” I said “No”. Then the person said, “You should do voiceover work”. I laughed and kept it moving. I would add my vocals on every performance edit we did. For me, it helped to tell a story.

I did the same thing for another team and they said the same thing so I’m sitting here like, Hmmmmm maybe I should. Everything isn’t as easy as jumping in and doing it but hey, why not? The moral to this story is, 1. – you never realize the hidden talents you may have and 2- when more then one person says you should consider doing something, you should go for it. Life is too short so be like Nike and just do it! Check out one of my samples below.

So there, that’s my voiceover story.

Until next time…. -Peace, Love and Dance 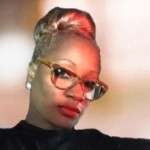